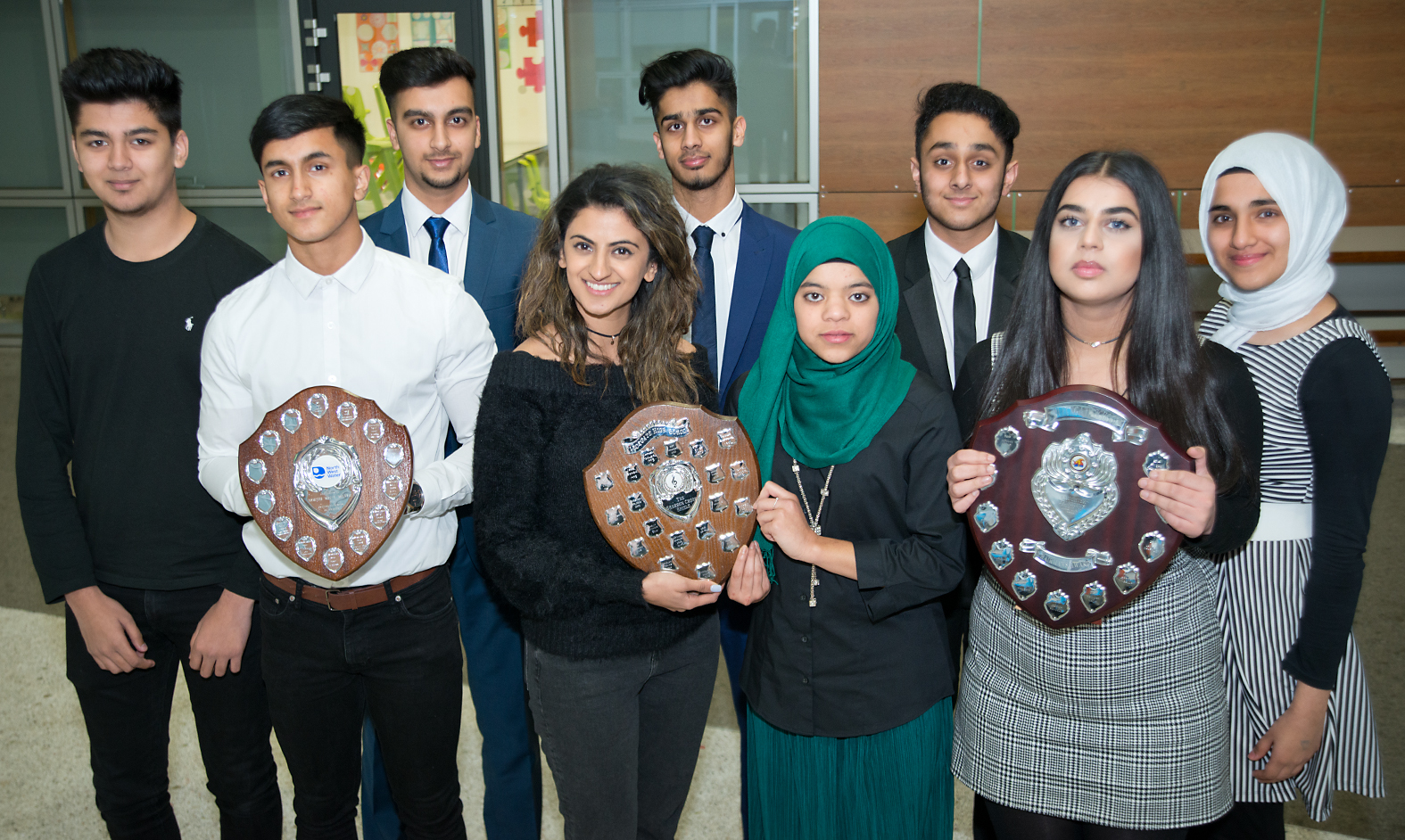 Harpz Kaur encouraged Pleckgate High School pupils to follow their dreams at their awards evening for their class of 2017.

Harpz is the presenter on the weekday Breakfast Show for BBC Asian Network and talked to the pupils who left last year about her battles to achieve her dream – and how it took many years of perserverance and hard work.

“I did a media studies degree and a post-graduate degree but I ended up working as a freelance journalist and voluntarily on radio as I really didn’t hit the ground running, I struggled to get a regular job,” said Harpz, 28, from Yorkshire.

“I had a lot of rejections and a lot of questions and pressure from family and friends about what I was doing, and when I would get a regular job. I did suffer from depression as I just couldn’t find my career path.

“Finally I knew I had to take matters into my own hands and I started a YouTube channel and DJ-ing, which was one of my passions.

“I hosted local events to try and get my name out there and I entered the Asian Media Awards, by chance really.

“I got shortlisted, I met a lot of important people at the awards, met the editor of the BBC team and he asked me to come down for an interview and the rest is history.

“It took me six years to get where I wanted to be and I think it’s important to encourage people to pursue their passions; don’t be put off by rejections and be inspired to break down barriers, whether it’s religion, sex, age, as everyone can achieve their dreams.”

Head Teacher Mark Cocker was proud of his ‘Class of 2017’ with Pleckgate, under the new Progress 8 measure for schools, now in the top 18 per cent of schools nationally and it has one of the highest performing maths departments in the country.

Mr Cocker said: “It’s superb to see the pupils return and highlight their impressive performances across a wide range of subjects and activities.

“Last year was a challenge with the changes to the syllabus and the grading system, but our pupils excelled, with an impressive 28 pupils achieving the top grade, Grade 9, across English and maths.

“The 2016/7 pupils achieved the best results Pleckgate High School has ever achieved.

“It’s not just about exam results though but our pupils have also celebrated community and sporting success.”

Award winners on the night included Wael Elshwhidi who won The English Award. Wael came to England from Libya at the start of his GCSE’s with English not his first language. He was targeted a Grade 2 in his English but achieved a phenomenal Grade 5.

The English Literature Award was presented to Shama Batool Shah as she celebrated the highest grade – a Grade 9- which put her in the top one per cent of the country.

The Maths Award went to Arsalan Malik who achieved a Grade 7 after a lot of hard work by Pleckgate staff and his own dedication and Ammar Rehman who celebrated a Grade 9 in maths and an A* in further maths.

Other prizes included The History Award which was awarded to Moosa Seedat who achieved an A* in his GCSE while also carrying out voluntary work at Blackburn Museum.

In the special awards, The Chair of Governors Award was presented to Hamnah Makda, who came through some challenging times but showed a determination to succeed.

The Headteacher’s Award was presented to Head Boy Abbaas Shakil, who was always keen to be involved in the wider life of school, sat on school councils, achieved highly in his GCSEs and wants to go on and study medicine.