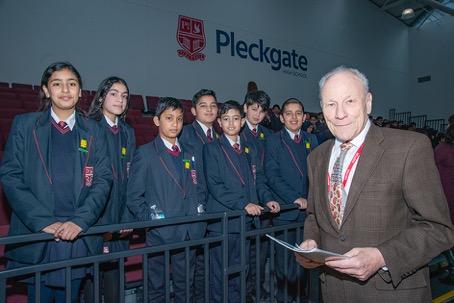 Year Nine pupils were rapt as they listened to a testimony from Holocaust survivor Tomi Komoly as part of a visit organised by the Holocaust Educational Trust (HET).

Tomi, who was a jew in Hungary and is now 82, talked about his experiences during the Second World War and after the Nazi invasion.

He talked of the roar of German tanks coming up the street in Budapest in 1944 when he was seven years old and how he became a refugee, and was welcomed with open arms in Austria in the 1950s before going to university in Glasgow and working as an engineer in ICI for 30 years.

“I was pleased to see in Pleckgate’s newsletter a story about their anti-bullying ambassadors,” said Tomi. “Bullying should not be tolerated anywhere and bullying was one of the United Nation’s origins of genocide or mass killing.”

Head of RE Ms Savage said: “It was a privilege for us to welcome Tomi to our school and his testimony will remain a powerful reminder of the horrors so many experienced.

“We are grateful to the Holocaust Educational Trust for co-ordinating the visit and we hope that by hearing Tomi’s testimony, it will encourage our pupils to learn from the lessons of the Holocaust and make a positive difference in their own lives.”

The testimony was followed by a question and answer session to enable pupils to better understand the nature of the Holocaust and to explore its lessons in more depth.

The visit is part of the Holocaust Educational Trust’s extensive all year round Outreach Programme, which is available to schools across the UK.

“The Holocaust Educational Trust educates and engages pupils from across the UK, from all communities about the Holocaust and there can be no better way than through the first-hand testimony of a survivor.  Tomi’s story is one of tremendous courage during horrific circumstances and by hearing his testimony, pupils will have the opportunity to learn where prejudice and racism can ultimately lead.

“At the Trust, we impart the history of the Holocaust to young people, to ensure that we honour the memory of those whose lives were lost and take forward the lessons taught by those who survived.”