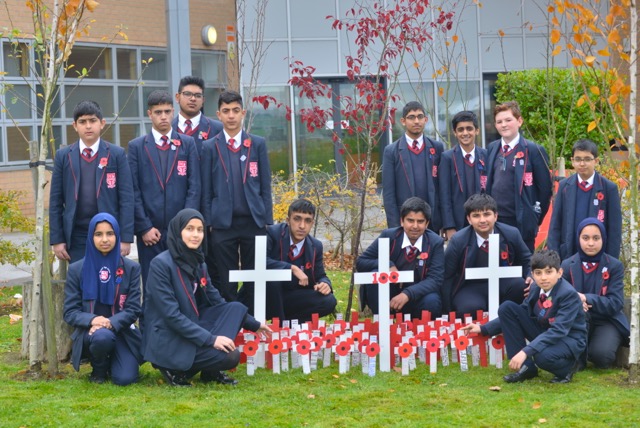 Every tutor group at Pleckgate High School explored the Commonwealth War Graves website and dedicated a cross in memory of someone who died in World War 1.

There were 100 crosses altogether which were placed outside the school in the Memorial Garden, which also includes a tree planted two years ago to mark the 100th anniversary of the Somme.

The school held assemblies all week about Remembrance and the sacrifices made during World War 1 and the conflicts since that have enabled pupils to have the freedom they have today.

The Senior Prefect Team at Pleckgate showed their respects to the fallen soldiers when they attended the commemoration of the 100th anniversary of the end of the First World War. Pupils attended a civic service at Blackburn Cathedral on Sunday morning and then took part in the parade and laid a wreath at the memorial in Corporation Park.

Mark Cocker, Headteacher, described the experience as ‘humbling and the centenary of the First World War had allowed the school to take part in their own reflections including creating a memorial garden at school and sharing experiences of relatives who have been involved in conflict. This  is important as it helps young people to remember their history and the selfless contribution made by many.’